An eruption of the Tonga volcano on Sunday was followed by a large tsunami. The country is now largely cut off from communication and air traffic, with supplies running low. 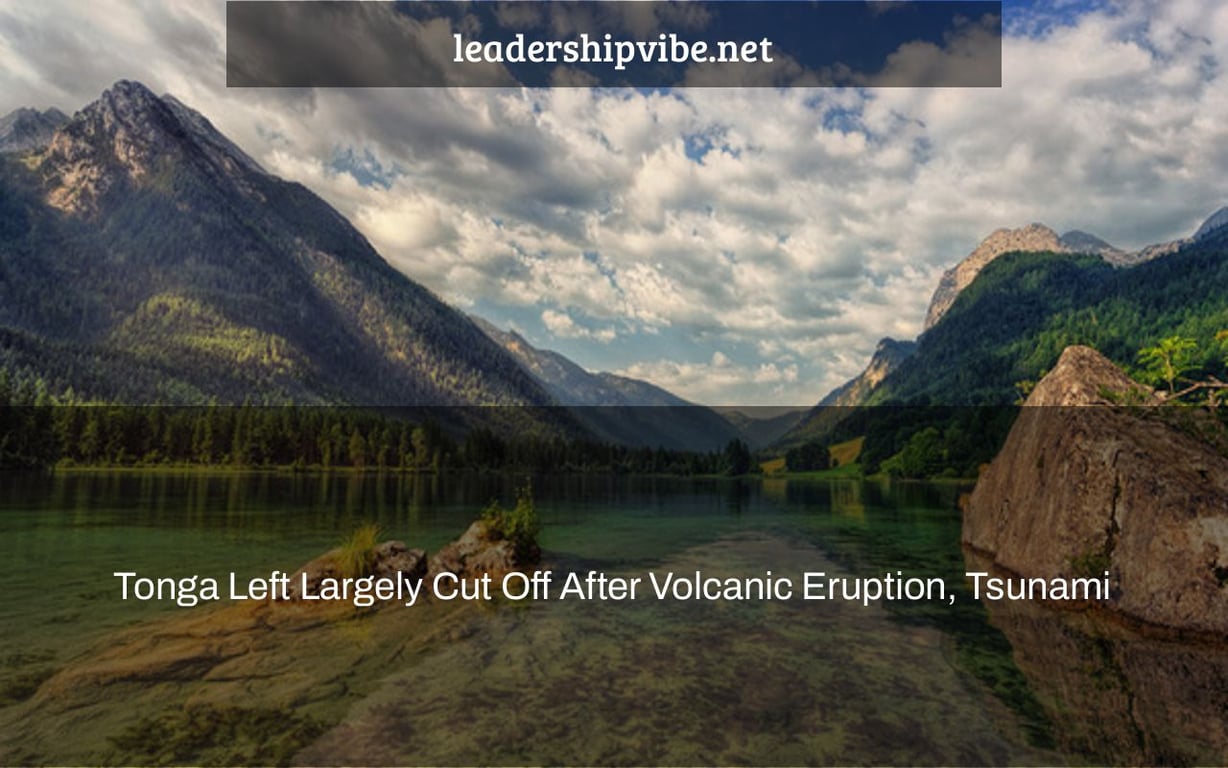 NEW ZEALAND, WELLINGTON — On Saturday, when an undersea volcanic explosion off the coast of Tonga generated tsunami waves of at least a meter high, the Ha’atafu Beach Resort’s management and their children dashed through the bushes in a frantic attempt to reach safety.

They’ve subsequently returned to a different environment. The tsunami wreaked havoc on the tropical shoreline, which was popular with surfers and snorkelers, and created ocean surges as far away as the US West Coast and Japan. The adjoining hamlet of Kanokupolu was badly devastated.

“It is with great regret that we must inform you that our lovely home, Ha’atafu Beach Resort, has been entirely destroyed,” the resort’s New Zealand owners said on Facebook.

Tonga, a Pacific country of around 170 islands, is calculating the cost of the eruption and tsunami’s devastation, which includes damage to energy networks and fresh water supplies. A New Zealand air force surveillance aircraft joined those efforts on Monday, with the goal of monitoring the damage on Tonga’s outer islands and estimating humanitarian requirements. The jet was unable to take off on Sunday due to the threat of a massive ash cloud.

The damage on Tonga’s main island of Tongatapu was not catastrophic, according to Katie Greenwood, head of delegation for the International Federation of Red Cross and Red Crescent Societies in the Pacific, but the situation on outlying islands was not clear yet, based on reports from humanitarian groups.

Days before its eruption, a cloud of smoke rose from the undersea volcano Hunga Tonga-Hunga Ha’apai.

Tonga will be careful about who it invites in to assist with the rescue effort, according to Ms. Greenwood, since the nation has no known community spread of Covid-19. “Tonga does not want to be replacing one calamity with another,” she said.

There have been no official reports of fatalities or injuries among Tonga’s 100,000 population. However, communications remain poor, with most of the information gathered thus far through satellite-internet and phone links to embassies and Tonga’s diaspora in New Zealand, Australia, and other locations. Families slept in temporary shelters after evacuating inland, according to images shared by Taukolo Matekitonga, a Tongan native of Sydney.

Tongatapu residents reported hearing a deafening sound from the eruption of the Hunga Tonga-Hunga Ha’apai volcano approximately 43 miles to the north, which is home to the majority of Tonga’s inhabitants as well as the Tongan monarchy’s waterfront palace, embassies, and resorts. The sky darkened quickly, signaling the arrival of the ash that would cover the archipelago. Tsunami waves began to smash ashore not long after, taking away cars and inundating coastal buildings, according to recordings.

“It definitely blasted our eardrums and everyone froze,” Nightingale Filihia said in a video broadcast on Facebook before Tonga’s internet connection was cut off from the rest of the world. “Everyone in town froze, and we were like, ‘What the hell is going on?’ and then everything just went pitch black,” she said.

Visibility was hampered by ash fall, and vehicles proceeded slowly along a nearby road as residents fled farther inland, according to footage taken at a family house in Tonga’s capital, Nuku’alofa.

“I’m at a loss for words right now.” It’s really terrible. However, they advised us to remain inside due to the hazard. “What a way to start 2022,” she said.

On Monday, Jacinda Ardern, the Prime Minister of New Zealand, said that power had been restored in Tonga’s capital and that Tongan officials had reached several remote islands. There have been indications that fatalities in such areas have been prevented, but she emphasized that the information so far is second- and third-hand. “It’s still early,” she said.

The accident, according to undersea cable network firms, has caused a breach in Tonga’s cable, which links the nation to the rest of the globe through Fiji. The most recent breach in 2019, which was caused by a ship’s anchor, took two weeks to fix with the help of a specialist vessel, although it didn’t have the added challenges of an erupting volcano.

A Hercules cargo jet, according to Ms. Ardern, would hasten the supply of clean water to Tonga, which is heavily dependent on agriculture and commerce with New Zealand and Australia.

“We recognize that water is a critical requirement. “We expect that the Hercules will be able to take off today,” she added, “in order to satisfy that requirement much more swiftly than our naval boats can reach the islands.”

Clean water supplies would be critical, according to Anahila Kanongata’a Suisuiki, a legislator in New Zealand’s parliament who has relatives in Tonga, since some towns in the Pacific island depend on rainwater tanks that might be readily polluted by ash.

According to Tonga Cable Ltd. Chairman Samiuela Fonua, who is now in New Zealand, it is uncertain if normal connections will be restored to Tonga within a few weeks.

A suspected cable break has been detected 23 miles offshore of Nuku’alofa, according to tests. Both ends of the cable would be brought onboard the repair vessel and joined together using specialist technology in the event of a clean cut, he added.

“This time, I’m not sure,” he added, “since we have to consider site circumstances, the fact that the repair ship will be approaching Tongatapu seas not far from the eruption site, and whether the volcano is still active.”

Stephen Wright can be reached at [email protected]